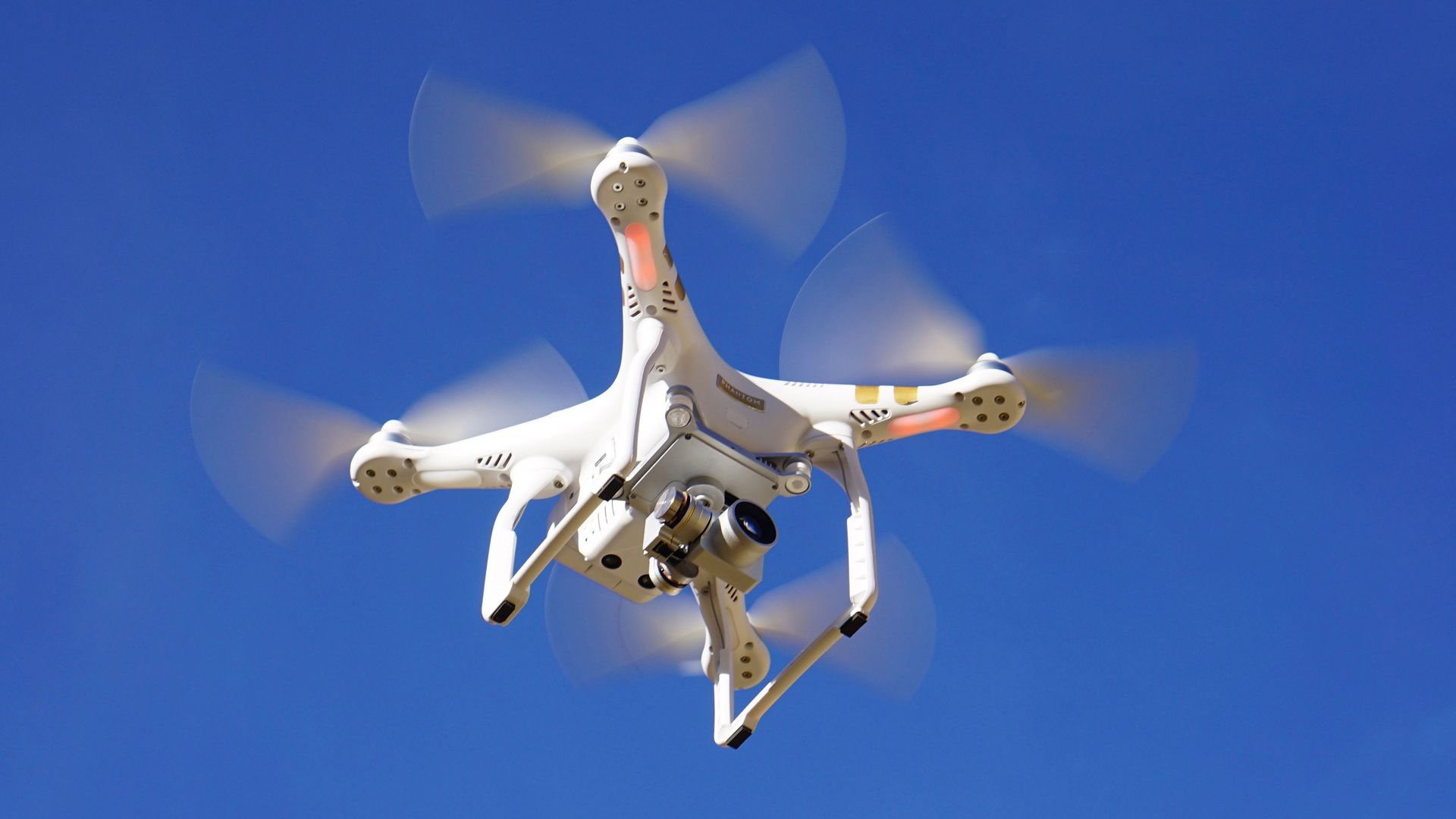 The Next Generation of Information Warfare

During our research, we were able to determine about 200 different uses for drones. They can be used for entertainment purposes, to deliver parcels, to monitor and observe or to engage in armed conflict. These and other possibilities will have a profound influence on societal, technological and legal aspects. This article summarizes part of our research and offers a view on the current situation as well as the future of this many faceted issue.

What is a Drone?

There are several definitions as to what a drone is. Mainly, differentiation happens by using the narrower and the broader definition of the term, both of which in turn are re-defined in every language.

The more narrow definition of a drone is that it’s an unmanned, autonomous or remote controlled flying object. In German, this is the most widely used definition for etymological reasons. According to German dictionary Duden a drone is a male honey bee. Because a bee flies, so do drones. Therefore a drone is usually a quadcopter that takes to the skies using four rotors. However, other types of propulsion systems are also included in this definition of a drone. It is interesting to note here that the two most widely used drones in armed conflict – the Predator series RQ1 and MQ1 as well as the RQ-7A Shadow – are both propeller powered.

The broader definition of the term disregards the medium in which drones move. Robots acting on land, in water or in space are also considered to be drones. Drones can move in several mediums, as seen with the Hydrofoil-Quadcopter that can fly and film under water. In German, drones without the ability to fly are commonly referred to as robots.

The English definition of drone is being used in EASA official documents. International circles keep referring to Remotely Piloted Aircraft Systems or RPAS, a subcategory or the Unmanned Aerial Vehicle or UAV.

Drones are used for many a purpose already and they will keep pervading all aspects of our lives. We differentiate between the following fields of use:

It is foreseeable that drones will establish themselves broadly and deeply in our society due to their number and the opportunities they offer. The revenue of the most popular manufacturers of drones confirm that there is an enormous chance for growth in this area. An example: Revenue of manufacturer Parrot has risen by 356% between 2014 and 2015.

States have established legal requirements for the use of their airspace. These requirements also apply, maybe partially, to model airplanes that find themselves usually legally likened to drones. Typically, these are:

The features of model planes have changed drastically over the course of the past 50 years and drones brought new risks. Therefore, changes to legislation will have to be made. In Switzerland, one such adjustment happened on 1 August, 2014. Further adjustments will follow in Switzerland. Furthermore, the EU is working on binding regulations.

Current requirements for flying objects use their weight as a deciding factor. Roughly, they can be divided into three classes. Exceeding 0.5kg general rules apply and exceeding 30kg permissions are needed. Technological advancements and the effects on social aspects will necessitate a new framework. It is possible that this new framework will take into account airspeed and use.

The International Committee of the Red Cross is making a case that drones must respect international law. This, too, must lead to binding laws and a change in thought.

The central risk of drones comes from their pilots. Due to the simplicity of piloting drones, they appeal to hobby pilots. They’re often not aware of legal requirements and common rules of the air. This can lead to dangerous situations involving not just them but other pilots and uninvolved third parties. Even small drones can be a threat to tail rotors of helicopters or jet engines.

In addition to that, there’s a chance drones crash due to mechanical or electrical problem. That’s the reason why flying over crowds is forbidden in Switzerland. Flying over densely populated areas or flying higher than a certain altitude it is recommended that drones have an emergency parachute attached to them. In case of crash, the risk of a hard landing can be minimized. The Schweizerische Verband ziviler Drohnen (Swiss Association of Civilian Drones) is undertaking efforts to be allowed to fly over crowds without limitations. Currently, they’re making a case for being allowed to flow over hospitals and airports in order to be allowed to exercise their hobbies in a controlled manner.

Drones can be used for attacks. This includes invasion of privacy. The legal handling in terms of counter measures is severely limited. Shooting down drones may or may not be illegal as long as there is no other option available. The correct course of action would be to call the police and file a complaint. It’s doubtful that this would solve the current problem. Processes are needed that can have a systematic and permanent effect. Law Enforcement has to be taught and trained in order to confront this situation quick and effectively.

In order to defend against a drone attack, it must be identified as such:

Disrupting drones in flight can be a defence against drone attacks.

Shooting down drones is possible but carries different risks and opportunities, depending on the method used. Legally, shooting down a drone is not allowed in civilian life and even official bodies can only do this within a very narrow margin.

The danger caused by drones will increase and be felt in all echelons of society. The legal framework will have to allow the use of drone defence. At the very latest when daily media are regularly criticising drones flying over public swimming pools there needs to be action taken.

Drones don’t just pose a danger for pilots and others, but they can have their legitimate uses. They can deliver medication, piloted by a local pharmacy. This brings with it the risk of a drone being attacked. Attacks can be destructive or disruptive. Or drones will be manipulated or hijacked.

It is foreseeable that drones will be equipped with noise reduction technology and shielded against EMP. This will become relevant in armed forces around the globe. If these technologies are researched, developed and established, prices will fall, leading to their use in the civilian sector resulting in better-shielded drones. This secures them against attacks. Thus, drone defence gets more difficult.

Many drones use a Linux or Android based operating system. This is installed in a reduced version, providing a small attack surface. But these installations come with vulnerabilities. If the drone owner does not have the chance of patching or updating the software, he or she will be flying vulnerable hardware. It is interactive systems that can be communicated with using radio signals are exposed during flight.

Outlook into the Future

Manufacturer DJI has the biggest revenue in drones worldwide. In 2013, the company made about 125 million dollars, in 2014 500 million and in 2015, the goal is to reach one billion US dollars of revenue. This growth will continue and gain traction and speed. This will create a lot of jobs and blend military and civilian sector. Due to mass production prices will drop and more people will be interested in drones.

By combining technologies there’s basically no limits to drones. Today, they shoot photos and movies. In the future, there will be affordable video drones with high-resolution digital zoom and infrared capabilities. Automating facial recognition such as Google Photos or Facebook Face Recognition can lead to quick and efficient personal identification and data gathering. Total surveillance would be unstoppable. These systems will probably be used in high-risk football games and to pursue criminals.

The rise in numbers of civilian drone pilots leads to public scepticism and, later, open resistance. This could lead to harder legislation in the civilian sector. In the United States, there is currently talk of a mandatory registration of drones. We are, however, expecting a similar effect as we’ve observed in the past. First – as seen in the Fichenaffäre in Switzerland – and then quiet acceptance as seen in the aftermath of the Snowden Leaks. Beneficial to reaching this acceptance could be the fact that drones have an immediate commercial use to customers. Companies like the Post, DHL, Amazon and local vendors will play an important role during this societal evolution.

Scepticism towards drone security will be reduced as the years pass. As soon as autonomous cars cruise our streets in regular intervals, drones won’t bother anyone anymore. This has a lasting effect on opening new fields of business that remain closed today because of fear of new technology. It’s not unreasonable to imagine a future where there are as many drones in our skies as there are planes today. In 2014, there were more drones sold than there were planes registered. This changing of the times will be visible at the latest during an extensive commercial establishment of drones.

As drones will become more reliable and more automated, they will completely occupy certain areas of business. Rescue flights by Swiss air rescue service Rega will only happen under certain circumstances. Wars will only be fought by remote controlled or autonomous machines, minimizing human loss among soldiers. If this will reduce casualties among civilians remains to be seen. Asymmetric warfare will continue to be fought dirty. International law and the law of war will have to be adapted.

We want to thank Dominik Jenzer, founder and president of the Swiss Association of Civilian Drones SVZD for the valuable conversations.