A Look at MSI Files

How to Analyze Windows Installer Security

The Windows Installer, also known as Microsoft Installer or MSI, is an installation and configuration service for software packages that is built into Windows. Windows Installer is widely used and corresponding installation packages are often used in organizations for software distribution and software management. In 2018 Microsoft announced MSIX as a new universal package format for all Windows platforms. Perhaps MSIX will eventually replace MSI, although currently MSI is well established and will remain so for the foreseeable future.

MSI packages can be created using tools from the Windows SDK or with third party applications. 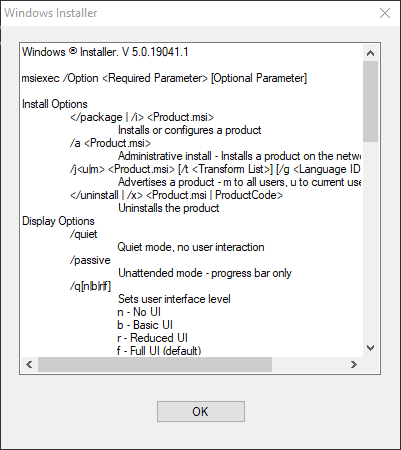 It offers extensive options and interacts with a Windows system service called Windows Installer Service that runs with the highest local privileges.

Various aspects of the Windows Installer can be controlled by group policies at the User and Machine level.

MSI files are relational SQL databases that exist in the form of compressed COM Structured Storage file. COM Structured Storage is a common format which is used for example for older Office documents. It allows storing different objects in a single file and is therefore a file system in a file. The MSI file format is not publicly documented but the corresponding API and the different database tables are described.

Several tools are readily available for analyzing MSI files. For an initial glance, the contents of an MSI file can be extracted with 7zip. The MSI file of Mozilla Firefox was used in the following example.

For advanced analysis, a helpful tool is Orca which is part of the Windows SDK and is freely available. 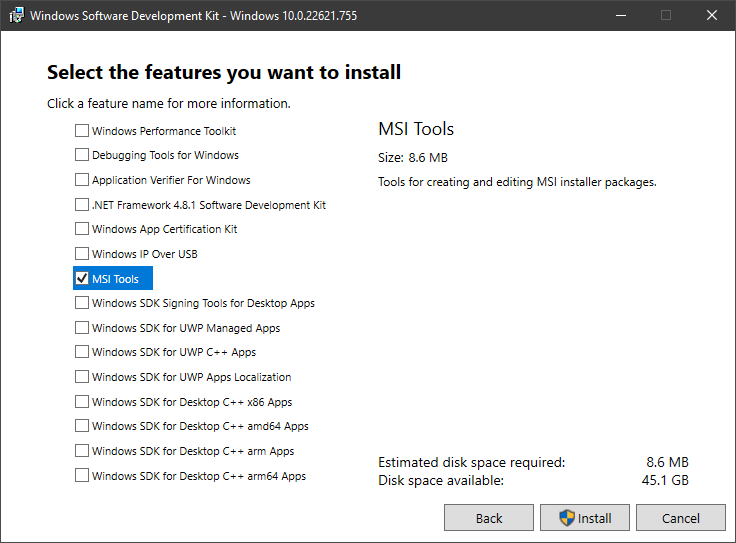 The installation process of this tool is a bit unintuitive. After the MSI components of the Windows SDK are installed, the Orca installation package is located as an MSI file in the directory C:\Program Files (x86)\Windows Kits\10\bin\10.0.22621.0\x86\Orca-x86_en-us.msi from where it can be installed.

After opening an MSI file in Orca, the contained tables and the corresponding data is displayed. 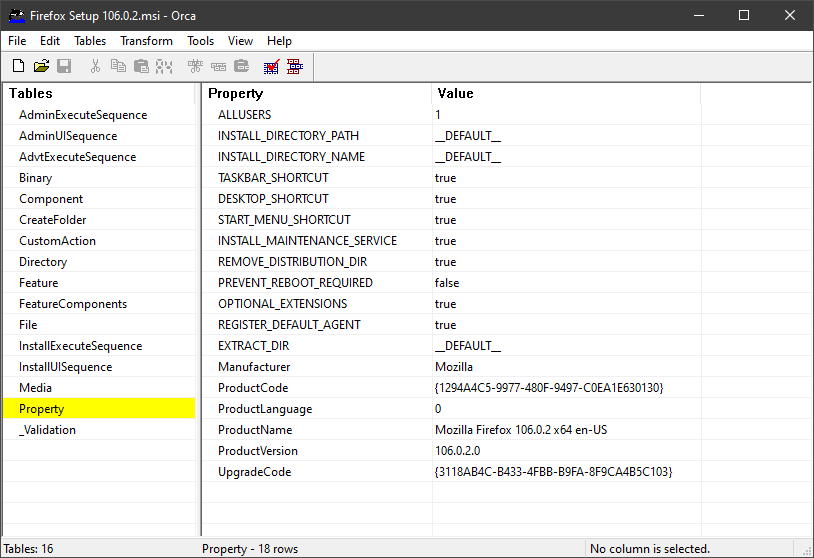 Similar information can be extracted from an MSI with the open source tools msitools.

The *.idt files correspond to the tables shown above and contain the same information:

In both cases it is interesting to take a closer look at the CustomAction table. As the name suggests, it contains actions that are executed during the installation, for example using JScript or VBScript. This is often abused by malware hidden in MSI files, as we will see below. However, legitimate installation packages often contain commands in the CustomAction table, too. 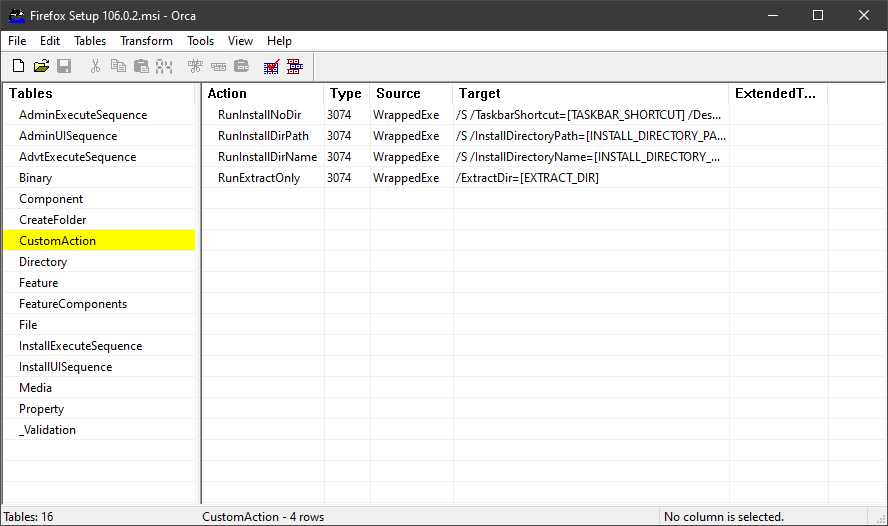 When using msidump, binary files and executables are extracted to the Binary and the _Streams folders:

Taking a closer look at all this information, it is already possible to get a good idea of what is going on during the installation. For example, in a recent security assessment it was found that batch files were temporarily created in the file system and executed during the installation process. By editing these batch files, it was easy to achieve local privilege escalation to SYSTEM.

Malware is frequently introduced via MSI files. The following example shows a simple analysis of the Purple Fox malware.

The directory _Streams contains the file disk1.cab which can be extracted with 7z:

A quick search for the file hash on VirusTotal suggests that it is known malware. 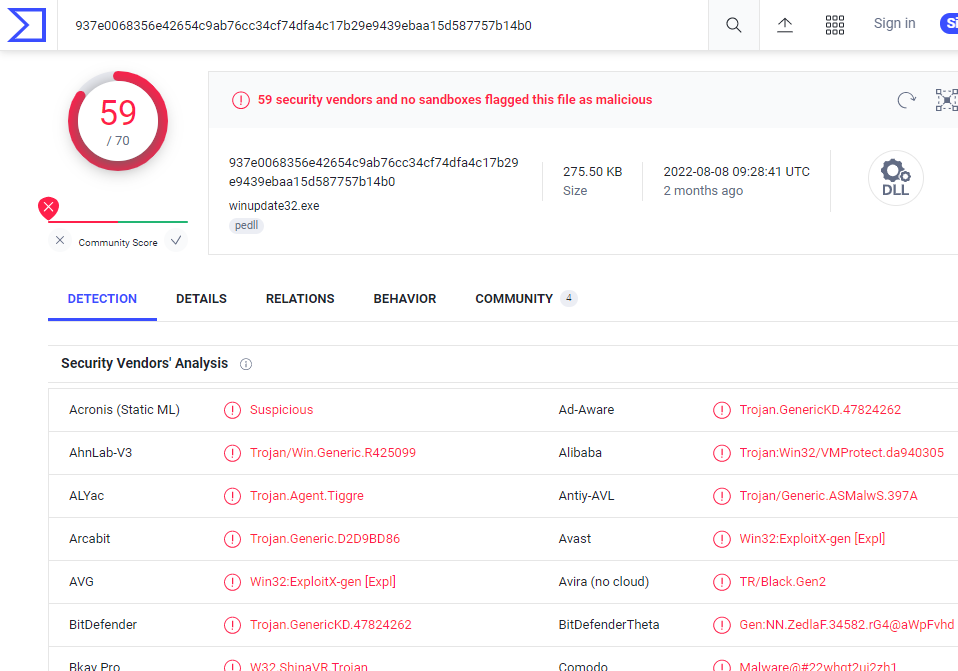 There are many more ways how malware can be packed and distributed with MSI packages. MITRE ATT&CK has an overview of the technique called System Binary Proxy Execution”:https://attack.mitre.org/techniques/T1218/007/

Windows Installer is an integral part of Windows and is widely used as a standard method of managing software products in many organizations. An MSI installation file often contains executable code or scripts, but the details of the MSI file format are not publicly documented. Executable code in CustomActions is often used in legitimate installation processes, but it also provides an opportunity for wrongdoers to distribute malware in a more or less hidden way. Because parts of the installation process can be executed with the highest Windows privileges, attacks abusing the software installation process are attractive for adversaries. Protection against malicious MSI packages is not different from well-known security principles and precautions whereby only installing software from trustworthy sources and always using up-to-date versions should be of top priority.