A Look Fifteen Minutes into the Future

Let’s have a look at our technology for a minute. Where it came from and what it is today. Remember Windows 95? That was amazing, right? And at some point around then, somewhere hidden in the murky early years of public internet, you could hook it up to a modem that still made noise (and while we’re on the subject, who hasn’t tried to imitate those noises at some point or another? They even made a commercial of that strange hobby). And today? You’re looking at this in a browser, your main applications are all online, and you store your data either on some shared workspace server or in a cloud environment. Maybe you’re waiting for your train as you’re reading this on your phone. Or you’re sitting in one, reading this on your laptop while you’re supposed to catch up with some work, answering some e-mails before you get to the office. It all sounded like science fiction at some point. Some of these then-futures even came true. Here’s a short list that is neither complete nor representative:

With all the then-futuretech at your disposal, and all the things that authors predicted over the decades, it might be worth looking at a few contemporary pieces of science fiction that are set in the immediate future and see what they have to say. And, who knows, maybe we’ll look back at these books, movies, comics and whatnot one day and go “Oh, he was totally right.” One thing needs to be said: We won’t talk about Orwell’s 1984, because everyone else seems to constantly do that. So let them do it. We’ll go further than that, even though you should absolutely read the book that is probably Orwell’s greatest work.

The Circle by Dave Eggers Predicts the Total Loss of Privacy 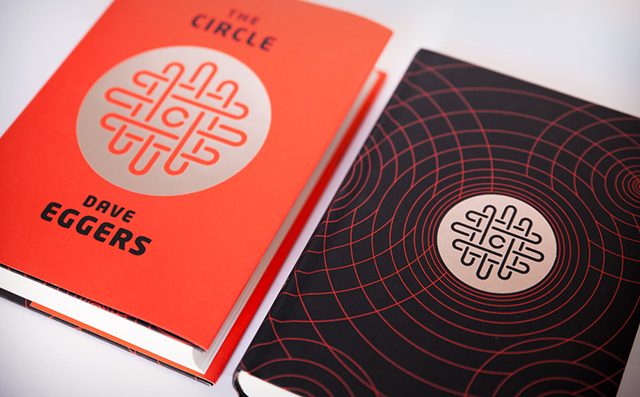 In his New York Times bestselling novel The Circle, Dave Eggers talks about how we are giving up our privacy willingly because it’s convenient and we get some sort of meaningless bonus points out of it. The story has a young woman named Mae starting her job at a company that is a blatantly obvious nod to Google and Facebook. Said company is called The Circle and it nears Completion. As Mae starts her job there, she is peer-pressured into rating everything, from the food at the cafeteria to the sexual performance of her lover. Eventually, a new trend emerges: Going Clear. This is when someone wears a camera around their neck and has it record everything he or she sees in a public stream. This happens shortly after The Circle introduces their newest model of camera. They’re tiny, adhesive and only cost 59.90.

Even though the book acknowledges that there is so much data uploaded into The Cloud that nobody could ever see it all, you get Smiles and Zings (think Facebook’s likes and Twitter) about your stream which could cause the stream to go viral. Despite all the horribleness that this brings, The Circle has a somewhat naïve, but kind of noble intention: They just want to inform everyone about everything.

Needless to say, the book is a 400 page soapbox, where Eggers thinly veils his own opinion on the matter by casting various characters as various archetypes of the argument. Still, it is the direction in which we currently seem to be heading, seeing as you have Facebook, Google, Yelp, TripAdvisor, Goodreads and whatnot that all rate something or other.¨

And interestingly enough, one man has gone clear: Ari Kivikangas, also known as Cyberman, has been streaming his life 24/7 since 2010. In Finnish. When he suffered a seizure recently, one of his viewers called the ambulance. And after having watched the show for the better part of ten minutes, it’s not only dreadfully boring, but also weirdly fascinating. There’s a man, listening to music, occasionally snorting loudly. That’s it.

Hotwire has Ghosts Because of WLAN-coverage 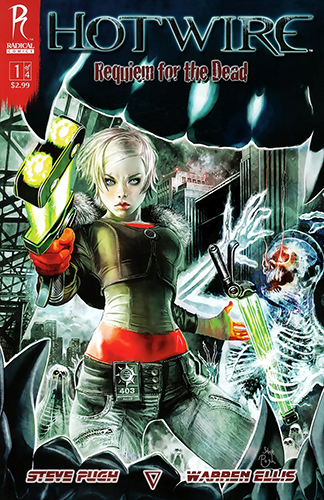 While people are worried today that the radiation emitted by mobile phones and wireless routers might give them cancer or any number of other diseases, British comic book authors Warren Ellis and Steve Pugh go one step further. In their 2009 comic book miniseries Hotwire: Requiem for the Dead and its sequel Hotwire: Deep Cut, they claim that the coverage of wireless signals in the near future becomes so dense, that the souls – or whatever you want to call the essence that makes a human being human – of the deceased can’t leave this place Earth anymore.

When the so-called Blue-Lights can’t go anywhere anymore, can’t taste or touch anything, let alone talk to anyone, they occasionally go insane. And when they do, their rage, their pent up feelings, can enable them to touch stuff again. Suddenly, you have an undead monster wreaking havoc upon the unsuspecting populace. Usually, so-called Suppressor Towers keep the Blue-Lights at bay, but these things are expensive and therefore only reserved for more posh neighbourhoods. Therefore, large parts of the city are still unprotected. That’s when the Metropolitan Police calls in their Detective Exorcists, short: DecEx, the most prominent of which is the socially incompetent and highly intelligent Alice Hotwire. She has a Faraday Cage etched into her skull so that Blue-Lights can’t mess with her head and she’s the best at what she does. The problem is that most people consider the deathly pale DecEx to be inconsiderate, rude, and basically a person nobody really wants to be around.

Okay, so this sounds highly unlikely. Because were this true, then hospitals might have noticed something like this at some point. Hospitals have wireless internet, too, in addition to all sorts of radiation-emitting devices such as x-ray-machines, MRIs and microwave ovens. Maybe they wouldn’t have noticed ghosts per se, but since, in addition to that, everything in hospitals is carefully measured and charted (even radiation levels from all kinds of things), they should have picked up an anomaly or two. Still, assuming that there is something like a soul that goes somewhere after its host is deceased, then we might sooner or later come up with something that hinders the escape of said soul. Even if it’s highly unlikely. And absurd.

Minority Report is Confused About Networks in General

In the movie loosely based on Philip K. Dick’s 1956 short story Minority Report, we get to watch Tom Cruise as John Anderton who is a police officer in the near future, where people in pods can predict a crime before it happens. Only that the system, thought to be perfect, has been compromised. And suddenly, Anderton finds himself in the crosshairs of his own police department.

“What has this got to do with computers and networks in specific”, I hear you ask? Well, simple. The design of the movie is easily the most impressive thing about it. You have cars that are designed by actual car designers that would – should they be built – actually work. You have computers that are operated by gestures. You have retinal scanners everywhere. Your TV watches you watch TV.

This was all deliberate on the part of director Steven Spielberg, who tried to ensure that the movie was as scientifically accurate as possible. With the exception of jetpacks, although having a jetpack would be totally awesome. Spielberg has even gone on record saying “I wanted all the toys to come true someday. I want there to be a transportation system that doesn’t emit toxins into the atmosphere. And the newspaper that updates itself… The Internet is watching us now. If they want to. they can see what sites you visit. In the future, television will be watching us, and customizing itself to what it knows about us. The thrilling thing is, that will make us feel we’re part of the medium. The scary thing us, we’ll lose our right to privacy. An ad will appear in the air around us, talking directly to us”.

However, when it comes to computers and their network connectivity, the movie suddenly seems to be confused. Why? Watch this:

What do you notice? Whenever data gets transferred from one device to another, they’re using either some sort of SD Card or that huge Plexiglas panel thing. The computers are not connected to anything.

“Well, this isn’t so bad. Maybe the Minority Reporters just don’t have internet in their world”, you might say. But they do. In a later scene, Anderton wanders through a shopping mall after having gotten illegal eye replacement surgery to mask his identity. Why? Because there are cameras everywhere that read your retina and do things like displaying ads based on your personal preferences and your shopping behaviour. This means exactly one thing: Somewhere, there is a massive database that stores your information. This database is accessed by the retina scanning computers. Remotely. Yes, there is a network somewhere.

Let’s assume that they’re not connecting the awesome gesture-controlled supercomputer that we all would love to have to the internet because they are worried for security and don’t want their computers to be compromised. That’s a valid concern. But having two computers connected does not mean that they have to be connected to the internet. It’s called a Local Area Network. And that has been around since the 1970s.

This issue gets even more confusing when looking at the short story this is based on Because in said short story, whenever the precognitive mutants in the PreCrime-department produce a prediction that the policemen will follow up on, the predictions appear simultaneously in both the police headquarters and the army general’s office. This, again, would require a network connection. It’s right there in the first chapter of the story.

Okay, so we’re deep in nit-picking territory here, but still it’s a prediction that is not very likely to come true. Because, the thing is, most of that particular scenario has come true. We have gesture-controlled computers. Some of them we even carry around on a daily basis in the form of smartphones and tablets. We also have the Kinect and its comrades that capture motion and allow us to control games. What we don’t have is people seeing into the future, thwarting crime. And we are highly unlikely to re-isolate our computers in the way that is shown in the film. Unless there’s some really weird apocalypse happening that knocks out all network connectivity, but leaves everything else intact. I hope this doesn’t come to pass, because then you wouldn’t be reading this article, would you?

So where does that leave us? In 2014, mainly. We’re here, we’re reading this – or in my case, I’m writing this – and we’re wondering what the future might bring. Beyond the fact that there will be a new iPhone that will look exactly the same as its predecessors, a new Samsung Galaxy and new, bigger TVs with better sound and whatnot, we can’t really tell. That’s what makes the future so exciting. That’s what makes us wonder and dread all the awesome things that clever people come up with one day. But one thing is important: We must stay curious. We must stay creative. We must be careful. We must read, think, build, fail and err. But never stop. Never stand still. Come up with new ideas, write them down, build them. It will be fun.